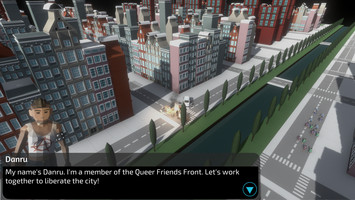 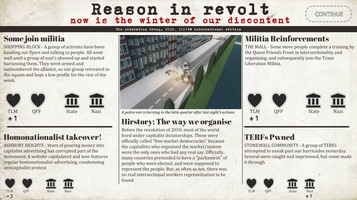 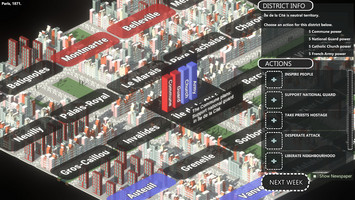 Hello everyone,  nice to meet you. In this post I'll share some info and updates about Trans Riot and its development.

We (that's me, the game dev, and one other person working on graphics) started development of Trans Riot one year ago. My development philosophy follows some core principles like release early, release often - which I learned from my time developing free / open source software.

During this year of development we've already accomplished a lot. We made a minimal working product very early: a game play loop where you could start a scenario, take actions, and win or lose the game. We have two scenario's in the works now: one is called Urbo Polarizo and is set in the near future, 2050. The other is based on the history of the Paris Commune in 1871, a brief period where Parisians tried to set up a self-governing city where all people were equal, before being massacred by the French armies.

We also have rudimentary working AIs and feedback on the actions all factions take and their effects. The Urbo Polarizo scenario is single player, with two AI opponents and one AI helping you, and the Paris Commune scenario is local multiplayer, with two factions played by humans, versus two factions played by the AI. In the final releases, both scenario's will be playable single-player or local multiplayer.

Since arriving at a playable game play loop, we've been sending the game to testers. We've had 6 test releases so far and test 7 is coming up soon. With every test release, we refine the game, we add features and we tweak the game mechanics.

Testing the game is important because it needs to be fun to play, as well as a challenge for more seasoned gamers. This is one of the areas where we still have a lot of work. With every test release, we finetune some of the mechanics and see what the effect is.

Local multiplayer only just arrived in test 6, so that will take a lot of refining as well.

The music is pretty much in place, thanks to some very cool bands about which I'll share more in a next post. But sounds and graphics are still minimal and need lots more improvements before the final.

That said, development is going well even though we had a few months of setbacks because of - stop me if you've heard this before - corona stuff that we had to deal with.

Right now we're aiming for an early alpha release in July 2021. We'll continue to share info and keep you updated with the latest news.